Cost: Hiking trails are free. Reservations and rental fee required for use of the beach area and pavilion.

Tips: Bring a scope for waterfowl in winter and for field birds all year long. ◾ The trails are not well-groomed; closed-toe hiking shoes or boots recommended. A compass or GPS as well as a printout of the trail map at link below would be useful.◾ No restrooms at the trailhead. There are restrooms in the beach area, but these restrooms may not always be open. 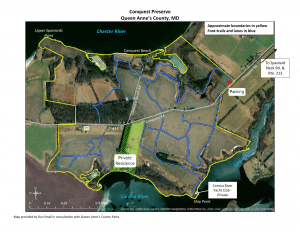 Conquest Preserve is poised to become one of the outstanding birding destinations on the Eastern Shore. This relatively new public preserve was acquired by Queen Anne’s County between 1998 and 2003 and protects important bird habitat, including grassland and wetland areas. The 758-acre waterfront preserve is northwest of Centreville and is situated on the Spaniard Neck peninsula, with five miles of shoreline on the Chester and Corsica Rivers. The Preserve is open to the public for passive recreation such as hiking, bird watching, horseback riding, and nature study.

The majority of the property had been farmed up until 2017, but now the former agricultural lands are in the process of being converted into wildlife habitat and open space for passive recreation. The preserve has a mix of tidal wetlands, large expanses of unmowed grassland (about 500 acres), scrubby edges along field edges, wooded areas, and some freshwater wetlands that may dry out seasonally. The mix of these habitats creates a multitude of good birding options. There are five restored wetlands: two are visible from the road and the other three can be seen by walking the trails through the meadows (see trail map at link at left).

A network of walking and horseback riding trails runs throughout Conquest Preserve (see trail map at link at left), although the trails are not yet clearly marked, so be prepared to explore. Note that the trails in the southwest sector of the Preserve are not directly joined to the trails in the other parts of the park, so if you want to explore that area, you’ll have to walk along the side of Conquest Road; be alert for traffic and exercise caution. There are good birding opportunities from the car along Conquest Road and Conquest Beach Road, with several spots along Conquest Road where it is possible to pull over onto the road shoulder. Be careful not to block driveways and always be respectful of private homes along the road and within the park.

Also note that the Corsica River Yacht Club is located at Ship Point, at the southeast corner of the preserve grounds. This is a private club, open to members only, and not accessible by car unless you’re a member. It is OK to walk the driveway, which goes through good habitat.

The grasslands are an amazing feature of the Preserve, considering how rare this type of habitat is becoming across the country. The fields are currently dominated by loosely spaced native broomsedge (Andropogon virginicus), creating perfect habitat for breeding and wintering grassland birds. And the habitat is about to get even better.

The MD Department of Natural Resources has provided a grant to allow Washington College’s Natural Lands Project and the U.S. Fish and Wildlife Service’s Partners for Fish and Wildlife to work with Queen Anne’s County to improve wildlife habitat at the Preserve. Restoration plans are targeting 125 acres of grasslands, 38 acres of wetlands, and 38 acres of forest – about 200 acres total. As of October 2020, the wetlands have been restored with native vegetation. The project will include broad meadows planted in native warm-season grasses and flowers to support pollinator and bird populations, as well as areas of native trees and shrubs. Public walking trails are being incorporated throughout. Kestrel and Barn Owl boxes are being installed at likely spots. The project will provide critical habitat for pollinators and bird species including a variety of waterfowl, grassland species such as Northern Bobwhite, and potentially the Black Rail and other marshland breeders. The project is also expected to improve water quality in the Corsica and Chester Rivers through the buffering and filtering capacity of the restored habitat.

At Conquest, there is also a beach along the Chester River that includes a pavilion and recreation area available for private events on a rental basis; public access to the beach is not otherwise available. The beach was restored in 2016 as a living shoreline project (see the video link in the Multimedia section below). The project is one of the first living shoreline projects in the country to incorporate sea level rise projections into its design from the outset, in an attempt to mitigate some of the damaging effects of climate change in a cost-effective and natural way. The Conquest Preserve project is the first in the country to use a “shingle beach” design, consisting of pebbles or small- to medium-sized cobbles, rather than the typical fine sand. The lightweight cobbles will move slightly with the tide, allowing the shoreline to shift and respond to wave action and rising sea-levels into the future. The living shoreline stabilizes the public beach by reducing erosion and increasing marsh grass habitat for wildlife. Small dunes are incorporated into approximately one-third of the shoreline to create a small freshwater wetland, providing habitat for migratory birds and other wildlife.

Additional plans for the Preserve include construction of gardens, a working farm, museum, and a nursery for the County, as well as a conference facility. There is currently no hunting allowed on the property.

MOS is encouraging more people to bird at Conquest, as it would show the county that creating and maintaining grassland habitat is not only beneficial for wildlife, but also has broad community support and interest. Be sure to post your sightings on eBird, as more documentation is needed of the birdlife at the Preserve.

As of October 2020, over 140 species have been reported at the eBird hotspot for Conquest Preserve, which is impressive considering that the Preserve has only been open to the public for a short time, and the majority of the eBird checklists have been posted since the spring of 2019. The tally of bird species has been accumulating rapidly.

As of October 2020, the list of birds includes 14 species of waterfowl, a smattering of shorebirds (check the five newly restored wetlands), and 11 species of sparrows. Notable birds include a Scissor-tailed Flycatcher in summer 2019 and a LeConte’s Sparrow in November 2019.

Pets are permitted on a leash. Do not allow dogs to run through the fields and flush birds.

The trails at Conquest are not wheelchair accessible. However, there are good birding opportunities from the car along Conquest Road and Conquest Beach Road, and at the parking area. There are several spots along Conquest Road where it is possible to pull over onto the road shoulder. Be careful not to block driveways and be respectful of private homes along the road.

Conquest Beach and its pavilion and recreational facilities are available by advance reservation for rental for private events. ◾ The trails at Conquest Preserve are extremely popular for horseback riding. ◾ The Corsica River Conservancy works to promote the health of the river and its surrounding lands. ◾ The Chester Riverkeeper works as part of ShoreRivers, a conservation organization that focuses on the Chester, Choptank, Sassafras, Miles, and Wye Rivers, Eastern Bay, and the bayside creeks. ◾ The Corsica River Water Trail Map is available as a free download from MD DNR. ◾ There is no chapter of the Maryland Ornithological Society in Queen Anne’s County, but many birders participate in MOS through the Kent County Bird Club, the Talbot Bird Club, or the Caroline County Bird Club; all of these MOS chapters offer field trips and meetings with informative programs, all free and open to the public.

There is a small trailhead parking area on the north side of Conquest Road, marked with a sign and kiosk. See trail map at link at left.

From the Chesapeake Bay Bridge: After crossing the Chesapeake Bay Bridge, continue east and north using US Route 50/US Route 301. Near Queenstown, US Route 50 and US Route 301 will split; bear left here to follow US 301 north. In 5.3 miles after the split, take the exit from Route 301 to go north on MD Route 213. Route 213 will bring you into Centreville in about 1.8 miles. Follow the signs to stay on Route 213 northbound through Centreville. Continue on Route 213 for another 1.9 miles, then make a left turn to go west and north on Spaniard Neck Road. (Spaniard Neck Road will be about 3.7 miles after leaving Route 213). In 3.0 miles, bear right to continue on Spaniard Neck Road in a northerly direction for another half-mile, then make a left to continue westerly on Spaniard Neck Road for an additional half-mile. Turn left to go west on Conquest Road. The parking area for the Preserve trailhead will be on the right (north) side of the road in about 0.7 miles.

From points north on the Eastern Shore: Use MD Route 301 southbound. From Route 301, take MD Route 300/Sudlersville Road west to Church Hill. In 3.9 miles, Route 300 will end at MD Route 213 in Church Hill. Turn left to go south on Route 213. In 7.6 miles, turn right to go west and north on Spaniard Neck Road. In 3.0 miles, bear right to continue on Spaniard Neck Road in a northerly direction for another half-mile, then make a left to continue westerly on Spaniard Neck Road for an additional half-mile. Turn left to go west on Conquest Road. The parking area for the Preserve trailhead will be on the right (north) side of the road in about 0.7 miles.